Video Of The Week - Nazi Propaganda In Palestinian Incitement - https://tinyurl.com/yy4opcym 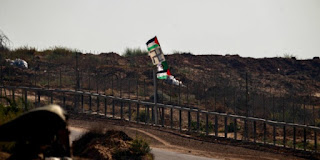 6-8-2019 - by Algemeiner Staff - https://tinyurl.com/y6jhrcdr
Israel continued on Tuesday to call out Hamas for the placing last Friday on the Gaza border fence of a Nazi swastika flag by Palestinian demonstrators.
“When #Hamas-led rioters in #Gaza raise the #Nazi flag, they expose their true intention — to annihilate the Jewish State. But Hamas will never have its way,” the Israeli Foreign Ministry tweeted.
On Monday, it was reported that Hamas had instructed rioters to not use the swastika “so that the Israeli occupation cannot take advantage of it.”
Elad Strohmayer — spokesperson for the Israeli Embassy in Washington, DC — tweeted on Tuesday, “Hey #Hamas, I get your concern about your PR but banning Nazi symbols just won’t do it. As long as you call for the destruction of the Jewish State, using swastikas is simply you being honest. It’s not the swastika that makes us think you want to kill all Jews, it’s your charter.”

The findings of research show that the PA schoolbooks' attitude to Jews, Israel and peace is based on three fundamentals: De-legitimization, demonization and indoctrination to violent struggle instead of peace. Based on these fundamentals, a narrative has been built that presents the conflict in a distorted manner historically, and does not leave any hope for ending it in a peaceful coexistence of the two parties involved.