PA. ALLOCATIONS TO TERRORISTS AND THEIR FAMILIES

As we’re relocating next week, I’m enforced to take a short break until we’ll be connected again.

For the full article go to: http://tinyurl.com/hszcy65

When Israel revealed in 2016 that it had arrested the Palestinian director of the “World Vision” aid organization in Gaza and later a prominent official of the UN Development Program (UNDP) in Gaza for diverting international assistance for humanitarian and civilian purposes to support Hamas terror activities, much of the world was upset. Yet at the same time, the Palestinian Authority (PA) officially, publicly, and proudly supports terror using international funding.

The PA pays directly and, as of 2014, partly through the Palestine Liberation Organization (PLO), about 1.1 billion shekels (around $300 million) every year as salaries to Palestinian terrorists in Israeli jails, continuing after they are released, and to the families of dead terrorists and other Palestinians who died fighting against Zionism.

These “incentives to terror” salaries appear clearly in the PA budget. They amount to seven percent of the Palestinian budget and more than 20 percent of the annual foreign aid to the PA. (See appendices for PA legislation and budget, and prisoner and martyrs payment schedules.)

It may seem strange, but the international and Israeli reactions to these payments have been minimal until recently, and the aid and the payments keep flowing without significant interruption.

The purpose of this study is to examine the ideological and political background for the payment of these salaries that constitutes blatant support for terrorism in contradiction to the Palestinian commitments in the Oslo agreements. It discusses the attitude of Israel and the international donor community towards the payments and the legal aspects of this phenomenon. Finally, the study presents recommended actions for dealing with it.

NEW ,VIEW OUR WEBSITE WWW.BRITISHISRAELGROUP.WEEBLY.COM
Posted by BIG Diary at 10:20 PM No comments:

Video of the week - The video that Obama and the U.N. want removed from YouTube - http://tinyurl.com/zq6leb7

Tom Gross and Sacha Dratwa contributed to this article.
Moshe Aharon, the driver of the bus, told Army Radio that “a group of soldiers was standing with their bags near the bus. I had just let them off. The truck drove into the group of soldiers, ran over them and kept going. The soldiers shot at the driver. He reversed and ran over them again.”
Leah Schreiber, one of the guides for the group of soldiers, told reporters that the driver had reversed and run over the bodies again.
“I was explaining about the view of Jerusalem. I saw soldiers shouting and screaming. Some of the soldiers started shooting. It took some time to kill [the driver] so he was able to reverse. The whole thing took maybe a minute and a half,” Schreiber said.

At first, it was not clear if this was an accident or a deliberate attack, but Schreiber said she “understood it was a terror attack when they started shooting at him.”
A number of victims were trapped under the truck after the incident, according to a Magen David Adom paramedic on the scene.
According to the Ben Zvi Institute, which led the trip for the army, the soldiers were cadets from the IDF’s officer’s training course, but from non-combat units.

The driver of the truck was identified as Fadi al-Qanbar, a resident of the capital’s Jabel Mukaber neighborhood, according to Arab media. The truck, with Israeli license plates, came from the direction of that neighborhood, which is adjacent to the promenade.
He was in his late 20s, married with four children, and had served time in Israeli jail, Channel 2 said. He bought the truck last year.
One seriously injured soldier was sent to Shaare Zedek hospital. She was unconscious and doctors were attempting to stabilize her condition, a spokesperson for the hospital said. 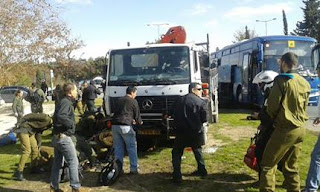 The scene of a truck ramming attack in Jerusalem in January 8, 2017
There was no immediate claim of responsibility but the Hamas terror group praised the attack as “heroic.”
Hamas spokesman Hazem Qassem lauded the attack on his Facebook page, saying, “These operations demonstrate that all attempts to bypass the resistance or to thwart it will fail every time.”
Palestinian assailants have used vehicle rammings as a method for terror attacks for years, and the method seemed to have been adopted by European jihadists in recent months, including in an attack in Berlin last month that left 12 dead, including an Israeli woman. 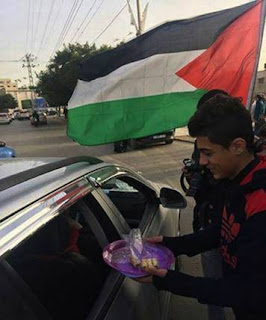 Hamas, a group previously praised by former U.S. President Jimmy Carter, British Labour Opposition leader Jeremy Corbyn, British peer Baroness Jenny Tonge and others, hands out sweets to motorists in Gaza after the attack yesterday in celebration of the murder of Israelis.


NEW ,VIEW OUR WEBSITE WWW.BRITISHISRAELGROUP.WEEBLY.COM
Posted by BIG Diary at 5:39 AM No comments:

AN OPEN LETTER TO THERESA MAY

Video of the week -  Obama's Alleged "Collusion" at UN:  http://tinyurl.com/zs3es2a


NEW ,VIEW OUR WEBSITE WWW.BRITISHISRAELGROUP.WEEBLY.COM
Posted by BIG Diary at 8:15 AM 3 comments: