Video of the week - Israel sends a warning to Iran - https://tinyurl.com/yac4atj3

At the time, the PA falsified its news, claiming terrorists were "innocent victims" of Israel's "fabricated stabbing attacks" and "executions in cold blood".

An article in the official PA daily acknowledged that 161 Palestinians were killed while carrying out stabbing attacks during the Palestinian wave of terror in 2015-2016 during which 40 people were murdered by Palestinians and over 500 wounded.

Palestinian Media Watch documented at the time that the PA falsely claimed that Israel "fabricated" the stabbing attacks, and "planted knives" next to the dead bodies of "innocent Palestinian victims" after having "executed" them in "cold blood."

One cartoon tweeted by Abbas' Fatah Movement in November 2015 visualized the PA libel showing an Israeli soldier dropping knives near the bodies of dead Palestinians: 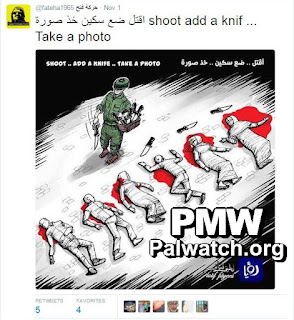 The recent article in the official PA daily recognizes the fact that 161 Palestinians were killed while attacking Israelis with knives:

"The Al-Aqsa uprising in 2015 (i.e., Palestinian terror wave, 40 murdered) that broke out spontaneously against the Israeli occupation's insistence on interfering in the affairs of the Al-Aqsa Mosque and continuing its Judaization. It continued for approximately one year, and during that year 250 [Palestinian] civilians died as Martyrs (Shahids), 161 of them while carrying out stabbing operations against the occupation's soldiers and its settlers."

Palestinian terror wave (2015-2016) - Palestinian violence and terror attacks against Israelis, including stabbings, shootings, throwing Molotov cocktails, and car rammings. It started in September 2015 and until and including July 2016, 40 people were murdered (36 Israelis, 1 Palestinian, 2 Americans, and 1 foreign worker from Eritrea) and over 500 wounded.