The UK and EU build an illegal road 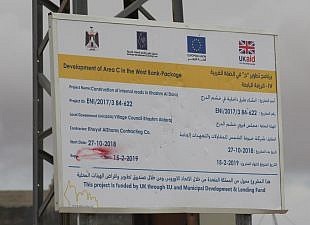 Photo of the signage along the route of the illegal roadway
Credit: Regavim

The Arab takeover of Israel Defense Forces’ training grounds in the southern Hebron Hills continues: The British government and the European Union are paving an illegal road through the very same training ground that was the subject of Regavim’s recent Supreme Court petition.

In recent weeks, illegal roadworks have been conducted in the heart of an IDF training area. The road is scheduled for completion in mid-February of this year, only weeks from today, and the signs along the route of this illegal roadway leave no room for doubt: “This project is funded by the U.K. through the European Union and the Municipal Development and Lending Fund.”

he bottom line: A new Arab city is being built in a strategically critical area, creating a swath of territory under Arab control stretching from the Arad Valley to the Hebron Hills and eastern Gush Etzion.

In the 1980s, a handful of Bedouin families lived in tents and temporary structures on the grounds of the training zone. Although it had no legal authority to do so, the Civil Administration set aside a number of “non-enforcement zones,” where they allowed these squatters to build without the construction permits, planning approval or zoning codes required by law. This past November,

Regavim submitted maps of the area to the Supreme Court, proving that over the past several years more than 500 illegal structures were built outside of the non-enforcement zones—specifically, in the areas that connect these zones..

In a case of give-them-a-finger-and-they’ll-take-the-entire-hand, the illegal construction in recent years has focused on connecting the clusters that the Civil Administration previously decided to “overlook.” The new U.K.-E.U.. roadworks connect a number of these clusters.

“Apparently, statements made in court are one thing, and action in the field is another,” says Yishai Hemo, Regavim’s Field Coordinator for Judea and Samaria. “The British and the European Union are conducting illegal activities on IDF training grounds, and aren’t the least bit shy about taking full ‘credit’ for it. Apparently, they don’t believe that the Civil Administration will enforce the law at all. We call upon the Foreign Ministry to respond forcefully to this violation of Israeli law and sovereignty, and demand that the Defense Ministry stop the illegal roadwork and protect the IDF’s training zones.”